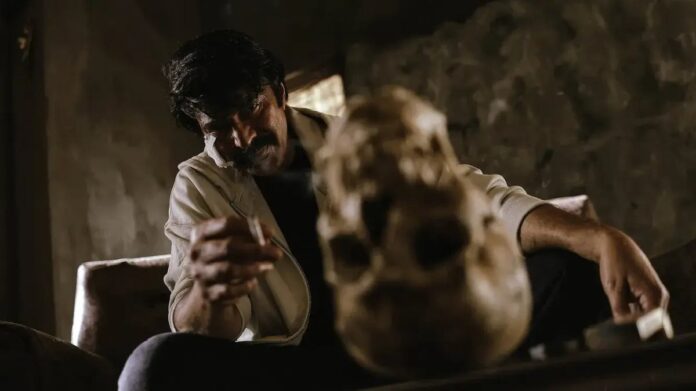 In the Malayalam cinema spectrum, an excellent psychological thriller is hard to come by these days. “Rorschach,” directed by Nissam Basheer, comes as a breath of fresh air. The film was released on the big screens on September 7th, 2022, and it is slowly gaining traction through solid word of mouth. Nissam Basheer earlier gave a polarizing yet successful “Kettyolaanu Ente Malakha” in the year 2019 but is now back with a  film that talks about revenge from the start. The film stars Mammootty, Bindu Panicker, Jagadish, Grace Antony, Asif Ali, Sharafudheen, and Kottayam Nazeer.

The movie begins with Luke Antony (Mammootty), a Dubai-based businessman in an injured condition, heading towards a police station to file a missing person’s report. Luke informs the police officer that his wife, Sophia Luke, has been missing since the car accident. Soon, a search party, along with the police, gets into the forest to look for Sophia but gains no results. Soon, Luke is approached by a local named Balan (Mani Shornur), who offers to sell his son’s unfinished bungalow. Luke buys the house without any second thoughts. Balan, though, does not share the money he receives with his family. Meanwhile, Balan’s family is getting over the tragedy of their son Dileep’s (Asif Ali) death. Balan and Seetha (Bindu Panicker) believe their son’s soul keeps haunting the village. Meanwhile, another local, Satheeshan, is suspicious of Luke’s sudden appearance and his intentions. Dileep’s widowed wife, Sujatha (Grace Antony), runs a cashew factory with the money Dileep got from Dubai and is not on good terms with Dileep’s mother and brother. Soon it is revealed that Luke and his wife’s home in Dubai was robbed, and a heavily pregnant Sophia (Ira Noor) was murdered by the robbers, while Luke had managed to kill another robber out of self-defense. His wife’s untimely death brings Luke to this shady town in Kerala. On the other hand, Ashraf, a local policeman, goes into a parallel investigation mode where he discovers unpleasant truths about Luke and Dileep and the connection they share.

“Rorschach,” the name of the film, is based on the psychological test done to understand an individual’s personality and feelings. The movie, directed by Nissam Basheer and written by Sameer Abdul, draws upon psychological trauma and elements of horror in the screenplay and story, which elevates the movie viewing experience. The screenplay is a tad bit unclear because, in lots of places, audiences are left to fend for themselves without any clear indication or explanation. But one thing the screenplay manages to create very well is the aura of a psychological thriller, the suspense of a crime drama, and an atmosphere of eeriness. The pacing of the film is also commendable, for at no point does the narrative stall or become dull. It quickly takes us from one scenario to another without much hustle or hassle. The buildup, which creates a sense of urgency coupled with supernatural elements, perfectly works thanks to a screenplay that, though flawed, holds the film firmly. A mysterious sensation with horror features forms the tension idle for a genre such as this one. One of the many reasons why this film holds the audience is the one mentioned above. Many films in the past claimed to be “psychological dramas,” but most of them lost grip, mainly because the screenplay and story did not have any realism as an element attached to them. Nissam and Sameer have created a unique crime drama that holds the ground from the start till the end without any distractions in between. It highlights how intense psychological damage can influence a person and their actions. The film, thankfully, does not ridicule or exaggerate people suffering from psychological trauma. The writers cleverly add voiceovers by several characters from the film who come in touch with Luke Antony, adding their story of who Luke Antony might be. The screenplay does indulge in plenty of suspension of disbelief in the form of over-the-top action sequences, which add masala to an already engaging film. The story of this movie feels very similar to the Netflix film “Thar,” directed and written by Raaj Singh Chaudhary, which was released earlier this year. Though “Thar” is purely a revenge thriller, “Rorschach” adds a hint of psychological thriller to it.

Music by Midhun Mukundan stands out mainly because it adds a layer of a riddle to the film. The film is mainly a riddle on how Luke will get to Dileep and his family. The music builds up the gravity of the situation Dileep’s family is going through as they receive tragic news one after the other. It is a delight to hear the amount of experimentation being done in Malayalam cinema these days by young artists. This film and “Thallumaala” by Vishnu Vijay are game changers when it comes to producing and mixing different kinds of sounds, which become a part of the storytelling aspect of the film. Midhun Mukundan’s soundtrack for this film is distinctive. The cinematography by Nimish Ravi helps the audience understand the mood of the screenplay by Sameer Abdul, giving the audience a peek into the minds of the characters and their motivation to carry out the goal.

The performances by all the actors were excellent, especially the legendary Mammootty, who is in his element in this film. Mammootty is determined, disturbed, and on it to achieve his end goal of exacting revenge on the person who is responsible for his loneliness. Bindu Panicker, as Seetha, Dileep’s mother, is a total flip of a character who would go miles to protect her children and the legacy of her family. She is cunning, conniving, patriarchal, and greedy, and Bindu Panicker nails the role to perfection. Grace Antony as Sujatha and Sharafudheen as Satheeshan come across as a catalyst that lets the wheel churn. Grace, as Sujatha, is determined to run the business started by her deceased husband, while Sharafudheen, as Satheeshan, is sure that Luke has a more significant motive here. Along with the performances, it is the climax of the film that stands out. The pre-climactic sequences come together and fit in well to form a climax that nails the culprit, joins the dots, and ends the story most satisfyingly.

“Rorschach” is a must-watch as it delivers what it had set out to do. It is an engaging psychological thriller without any caricaturist leads or villains. Here, everyone carries a shade of grey; everyone has a reason to behave the way they do. “Rorschach” sets out to give you a psychological revenge drama that never slows down. A must-watch

“Rorschach” is an action thriller film directed by Nissam Basheer, and is running at theatres near you.