‘White Noise’ Review: A Reality Check In The Form Of Distractions

Are you afraid of impending death? Noah Baumbach’s new dark comedy personifies this feeling in the form of a contemporary American family in the 1980s. “White Noise” is adapted from Don DeLillo’s classic of the same name (a novel that most believe is “unfilmable”) and is Noah’s first adaptation. For those of us who find comfort in the simple nature of films, this one may come across as overbearing and even cacophonous at times. If you’re one to get anxious easily, we recommend skipping this one. It seems this year is drizzled with genre-bending films of all shapes and sizes, and perhaps a chaotic creative outlet is the outcome of a couple of years of lockdown. Baumbach makes an ambitious argument with this heavily intellectual film which is sometimes lost in translation but manages to entertain never-the-less. Does it work for all, though?

“White Noise” follows a family of six, the Gladneys, which includes Jack (Adam Driver), the dad, Babette (Greta Gerwig), the mother, and their four children (three from previous marriages and one of their own). Jack’s an academic who specializes in “Hitler studies” (whatever that means) at a college across the hill. Jack’s academic life includes a friend and fellow educator, Murray (Don Cheadle), who believes his Hitler is Elvis (interesting parallels, to say the least). The Gladney household is highly charged, with everybody talking over each other about the mundane things in life. At some point, a disaster strikes in the city when a drunk driver smashes his tanker filled with a flammable substance into a train filled with toxic chemicals, causing a black “billowing cloud” to rise across the area. The “Airborne Toxic Event” (not the band, although they got their name from this book) spikes chaos, and everything goes haywire in the town, but it seems amongst this external disaster, there is an underlying turmoil waiting to damage the Gladneys’ positive spirit and Jack’s calm temperament. Will they survive the damage?

What I appreciate about films is their ability to inspire conversations; whether you love them or hate them, there’s no denying the fact that you want to talk about them. The dark themes of “White Noise” can give one a deep dive into existentialism, or its heartfelt message could lead one to have a confrontation with their inner demons. Either way, it evokes thought, and that’s what makes it a film worth watching. “White noise” doesn’t necessarily have a linear plot line and jumps between a Spielberg-style adventure film and a noir-style thriller within the span of its 2-hour, 15-minute run time, causing a feeling of whiplash that is definitely intended. If we’re too focused on the “white noise” Noah throws at us, we may miss the point entirely. The film touches upon many themes, including gun violence, the fear of death, family life, the doom of consumerism, love, and happiness in an erratic world. There is something relatable in it for each and every one of us. It is layered with a feeling of dread throughout and packaged as an apocalyptic comedy (yes, I just made that up), but in its crux, it is a nuanced family drama, just like Noah’s critically acclaimed “Marriage Story.” If you go into “White Noise” expecting something similar to his previous work, you may come out disappointed. The gigantic budget and unique screenplay adaptation are an experimental step away from his usual, but what remains constant is his use of natural situations rooted within human sociology.

If you’re the kind of person who can do math while listening to their favorite music at the same time, you may be able to watch this movie better than others and even enjoy it a bit more. Noah tests our intelligence through the unique pacing and genre-bending distractions of the film, which in the end, is a reflection of everything the world looks like right now. Although the movie is an overly colorful and loud feature set in the 1980s, there could be no better time for this story to be adapted. One could argue that the fact that “White Noise” was written in the 1980s makes DeLillo’s work extremely futuristic and a bleak prediction of exactly what was to come and falls short of being “fantastical” today, but to me, it’s an earnest attempt to stand out in the currently saturated systems and a bold step that just might fall a little bit short of hitting the mark for movie-goers. Adam Driver, Greta Gerwig, and Don Cheadle give incredible performances that make you sometimes question what the hell is going on but, at the same time, get you sucked into the universe that Noah has created. A scene between Don’s Murray and Adam’s Jack in a classroom, paralleling the lives of Hitler and Elvis, is extremely entertaining in a theater-like rebuttal that has one questioning the similarities between the crowd-pulling capabilities of a beloved pop star and a murderous dictator (never thought this would be a sentence). Greta Gerwig’s “Baba” is subtle, heartwarming, and confusing, delivering some incredible dialogue in a very nonchalant manner, making one wonder about the importance of the dark subject matter. There will be tears at the end.

Overall, “White Noise” is an anxiety-inducing family drama that makes one question our journey toward impending doom, which is an incredible attempt at showcasing mass hysteria and the mundane lifestyle of the contemporary American family. This is the opposite of a popcorn film that you’d be expecting to watch in the last few days of December, but if you’d like to have your clocks turning, we’d say give this one a go! 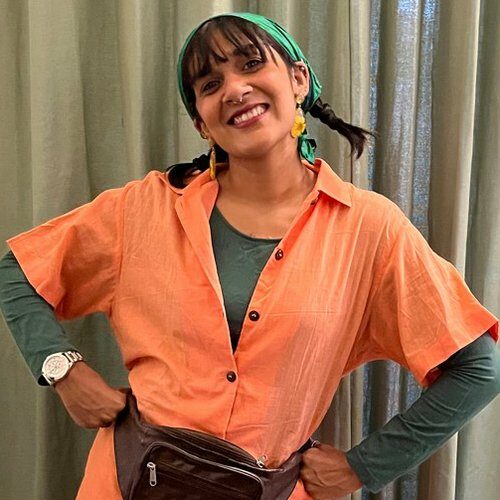 Ruchika Bhat
Ruchika, or "Ru," is a fashion designer and stylist by day and a serial binge-watcher by night. She dabbles in writing when she has the chance and loves to entertain herself with reading, K-pop dancing, and the occasional hangout with friends.
Subscribe
Login
0 Comments
Inline Feedbacks
View all comments