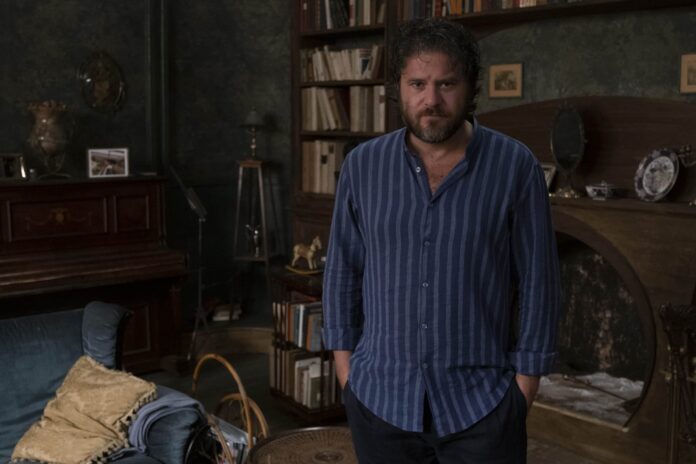 Why can’t time travel thrillers be engaging? A tale of one person jumping from one timeline to another to change things in the past should be interesting and not confusing for the audience. “The Guest Room” or “La Stanza,” an Italian language psychological time travel thriller, is one such perplexing tale of a man coming from the future to the past to make some changes that will change the course of his life. After his debut, Aquadro (2013), and his successful Deep in the Wood (2015), Stefano Lodovichi’s “the Guest Room” or “La Stanza” was released on the big screens on January 4th, 2021 and has been streaming on Amazon Prime Video since October 25th, 2022.

The Story Of Stella And Sandro

Stella (Camilla Filippi plays Stella), all in her wedding garb, stands on the ledge of the window, ready to kill herself by jumping off the ledge as the rain is pouring heavily in front of her. The bell rings, and soon she gets down from the ledge and hurries down to open the door; a curious-looking man named Giulio (Guido Caprino) informs Stella about the booking he has made online to stay in her spare bedroom. Stella is initially confused, for she had stopped taking in guests a while back. Giulio informs her of making the booking through Sandro, whom he claims to have spoken to before heading to this place. Believing his words, she invites him in and offers to provide proper facilities for his stay at the apartment. Giulio is happy to see the arrangements Stella is trying to make for him. He starts cooking for her and himself. As they keep conversing about his travels to Japan, Giulio mentions that his parents are long gone. As Giulio starts preparing food for them, Sandro (Edoardo Pesce) walks in. Stella is emotional and happy to see him. Sandro confirms that he had removed the ad for the spare room from the website long before. Giulio soon realizes his plan is busted, knocks Sandro and Stella out, ties them up to the chair in the kitchen, and starts his interrogation. He keeps asking them about their only son. Stella initially had said her son, who is also named Giulio, is with his father, but she reveals he is locked inside one of the rooms in her apartment. Giulio starts confronting Stella and Sandro about their relationship and their past. There is a secret Giulio holds against Stella and Sandro as he starts intimidating and hurting them. This forms the crux of this 90-minute film.

“The Guest Room” (“La Stanza”) is one such film whose premise is excellent, but the screenplay starts deteriorating as the movie progresses towards its climax. As the climax comes along, the entire movie falls apart with no hope of reassembling it. But what keeps the film interesting till the end is the atmosphere the director Stefano and cinematographer Timoty Aliprandi create using the rain and bring in fear of claustrophobia and no hope to get out. Stefano and Timoty do a fabulous job of creating a sense of sadness and depression through their camera work. The movie-watching experience is elevated because of the film’s technicalities. The sense of tension, eeriness, and pain Stella goes through is palpable through the screen. Her constant suicidal thoughts add to the pain that looms around in the film like air. Along with good direction and intense camerawork that peeks into the eyes of the three protagonists, it is the performances of the leads that hold the film to the ground, never letting it lose its grip. Camilla Filippi as Stella is exceptional. I remember watching her in the Netflix Italian original show, “The Trial.” Her performance as the accused was stellar. Here too, Camilla brings her A game in portraying Stella as a vulnerable, suicidal woman dealing with her husband’s infidelity and her mental health issues. The performance by Guido Caprino as Guilo is excellent as the intruder who comes to seek answers from the couple and will go to any extent to receive it. The production design by Massimiliano Sturiale and the art direction by Adriano Cattaneo add to the tension that is being created from the beginning. The home looks live-in.

What Does Not Work?

The screenplay and the story by Stefano Lodovichi, Franceso Agostini, and Filippo Gili are the biggest flaws that the film has. “The Guest Room” starts with a good pace, but as the film reaches its mid-point and the big reveal is made, the audience tends to question if it is possible. The screenplay doesn’t answer basic questions, which are how, where, and what   Giulio do to end up in a situation like this one, and how was he able to access devices to time travel to question Stella and Sandro? The basic time travel funda should have all the questions answered in the screenplay. Who helped, how was it possible, why did he do it, and what are the rules if you change things in the past? None of these questions are answered, and the screenplay is left for the audience to decipher.

In the second half, the screenplay and story are just not clear on what they want to convey to the audience. Tugging at the emotional angle of a mentally disturbed mother trying to save her son is not enough to keep the film afloat. By the climax, both fall apart because Giulio keeps explaining how he does what he does, but no rules are defined clearly for the audience to understand his intentions. The film is unnecessarily stretched; the screenplay goes around the bush to explain Giulio’s intentions but never really answers the pertinent questions mentioned above. The time travel concept has not been explained clearly, which will leave the audience dumbfounded by the end of it. The performance of Edoardo Pesce as Sandro also brought down the energy of the film. His performance as the man accused is strictly average and does not help the film elevate.

Stefano Lodovichi’s “The Guest Room” or “La Stanza” can only be watched once, for it leaves the audience perplexed. A moody film surrounding mental health and time travel cannot be made just for the heck. The film needs to have layers for the audience to appreciate it. I only wish the makers would have spent enough on developing a layered script. “The Guest Room” or “La Stanza” is a film that leaves you with an expression: what was that?

“The Guest Room” or “La Stanza” is now available on Amazon Prime Video with subtitles.