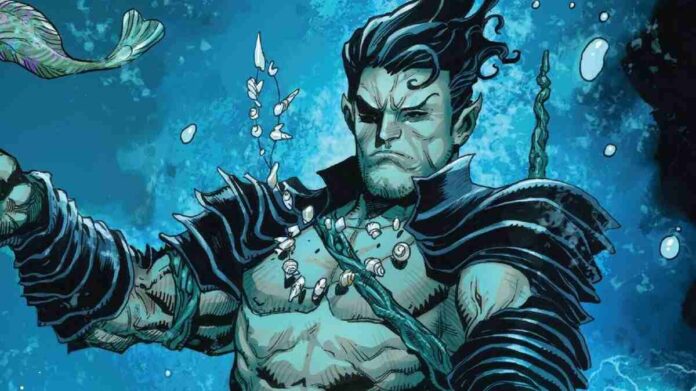 Origins And Powers Of ‘Namor The Sub-Mariner,’ Explained

One of the few Marvel Comics’ first Golden Age characters, Namor the Sub-Mariner, will finally make his live-action debut in the upcoming “Black Panther: Wakanda Forever.” Having had a substantial history in comics for more than eighty years, this complex character’s integration into the Marvel Cinematic Universe, aka MCU, will be something to look forward to. We will discuss his comic origins and the way the MCU is likely to treat one of the first super-powered characters.

Namor was created by legendary writer-artist Bill Everett in early 1939. He was initially created for “Motion Picture Funnies Weekly” #1, which wasn’t released. The character made his first public appearance in “Marvel Comics” #1 in October 1939, appearing alongside another Marvel veteran, The Human Torch (the Jim Hammond version, not to be confused with Johnny Storm). According to creator Bill Everett, Samuel Taylor Coleridge’s seminal poem “The Rime of the Ancient Mariner” was the major inspiration behind the creation of the character. Namor appeared almost two years earlier than Marvel’s first flagship hero, Captain America (March 1941). Initially, Namor was created as a foil to the Human Torch, based on the contrasting fire-water dynamics. Later as a character, he grew extremely popular, and for a short period, his title was the most sold comic of Marvel. In a way, he was the first significant character produced by Marvel.

In the comics, Namor is of human-Atlantean origin, and according to Marvel canon, publishing period-wise, Namor is the first mutant. American sailor-explorer Leonard Mckenzie was undertaking an expedition on behalf of the US government to explore the source of Vibranium near Antarctica. Due to the bombardment done by them during excavation, the mythical realm of Atlantis, which was located right under the Antarctic region, got affected. For those who are unaware of the myth, Atlantis is a fictional submerged country of water-breathing human denizens, and like Norse and Greek mythology, Atlantean mythical lore has been liberally used by both comic franchises, DC and Marvel, through the ages. Marvel’s Atlanteans are known as “Homo Mermanus,” a subspecies of surface-dwelling humans. Then Atlantean King Thakkor’s daughter, Fen, went to the surface world to investigate and inadvertently fell in love with Captain Mckenzie. They exchanged notes on each of their cultures and got married on the ship. Fen’s prolonged absence worried the Atlantean King so he sent his troops to the surface. Atlantean warriors attacked the ship, killed most of the sailors, including McKenzie, and brought Fen back to their abode. Fen gave birth to a son who was named Namor, which means’ avenging son’ in Atlantean. Being half human, half Atlantean, Namor’s human-like complexion differed from that of blue-skinned Atlanteans, making him  occasionally experience the treatment of a traitor or outsider.

Namor’s mutant abilities had manifested since his birth as wings in his ankle, which granted him the ability to fly. In fact, Namor was one of the first super-powered characters to have this ability right from their origin. Aside from Atlantean physiology, which allows him to move faster underwater and breathe, Namor is also several times stronger than average super-humans and Atlanteans, often matching the strength with the likes of Thing, Red Hulk, She-Hulk, and others. Like other Atlanteans, his famous battle cry is “Imperius Rex.”

Namor has been compared with DC superhero Aquaman occasionally due to the similarities these characters have shared with each other since the beginning. Both are half Atlantean and half-human, can psychically connect with marine life (although Aquaman has a much stronger connection ), and both are heirs to the throne of their underwater kingdom and received the treatment of half-breeds initially by their underwater denizens. However, there are a good number of unique features present to differentiate them too.

Namor appeared in comics almost two years earlier than Aquaman’s appearance (November 1941). The major difference is their allegiance. While Aquaman is a do-gooder hero, Namor, having an ever-shifting moral compass, never shies away from taking extreme measures to achieve the kind of results he wants. Namor is loyal to his subjects and only to his self-interest. The short-tempered, proud monarch of Marvel is often considered to be the first anti-hero in comic book history. Aquaman, on the other hand, has a more comic history behind him, thanks to him being more popular and getting more exposure between these two.

Namor In The Marvel Cinematic Universe

Actor Tenoch Huerta will portray the role of Namor the Submariner in the upcoming “Black Panther: Wakanda Forever.” The character and Atlantis had been teased in the MCU since “Iron Man 2,” and the first “Black Panther” movie also almost had a post-credit scene with Namor in it, which was later changed due to continuity problems. To avoid comparisons with DC’s “Aquaman” movie (2018), the MCU has given Namor Mesoamerican origins. Atlantis has been substituted in the MCU with Tlalocan, the mythical Aztec paradise. Namor’s powers might also be a gift from the Aztec wind and rain protector God, Quetzalcoatl, as the dragon-like headdress Namor has worn in promotional pictures and the murals in Atlantis, as seen in the trailer, suggest that. Also, the creation of Atlantis and Homo Mermanus in the MCU might be a result of Celestial Tiamut’s growing stature, as seen in the movie “Eternals,” which probably displaced a gigantic body of water and submerged the city of Atlantis. Namor had lived before the World Wars even happened and had fought against the Nazis. With the Spanish colonization of the Aztec people coming into question in Wakanda Forever, it remains to be seen whether we will see Namor’s war-era flashbacks.

Namor will initially serve as the primary antagonist in the movie. In comics, Wakanda and Atlantis share a history of bitter rivalry. In the MCU, the reason might be more personal in nature, as while letting the world know more about Wakanda, they have compromised the secrecies of Atlantis, and the world has turned its attention and interference to the latter. With T’Challa’s absence due to actor Chadwick Boseman’s unfortunate demise, Wakanda remains unprotected and vulnerable. The trailer suggests Namor, along with other Atlanteans, will flood Wakanda, which is an event that happened in comics when in “Avengers vs. X-Men.” As per the events of the comics, an enraged phoenix-force-wielding Namor brought a tsunami to flood Wakanda. Also, a recent rumor suggests that another key supervillain, the Latverian King Doctor Victor von Doom, might be orchestrating the war between Wakanda and Atlantis and will make his appearance in post-credit scenes. The rumor seems believable, as Doctor Doom and Namor were occasional friends too. Also, like in comics, Namor might be instrumental in the creation of the villainous team Dark Illuminati or Cabal, as fellow members like Doctor Doom, Norman Osborn, Taskmaster, The Hood, and Loki have either already appeared in the MCU or are set to appear soon.

With the MCU adjusting its character gallery to make way for the more extreme, on-the-edge types of characters, those who are posited in stark contrast to traditional heroes, Namor seems to fit right in. A complex character like him, when written well, can become one of the major players in the future without the Avengers. As mutants are being introduced gradually, the appearance of the first mutant from Marvel can surely ease the future for mutants in the MCU.