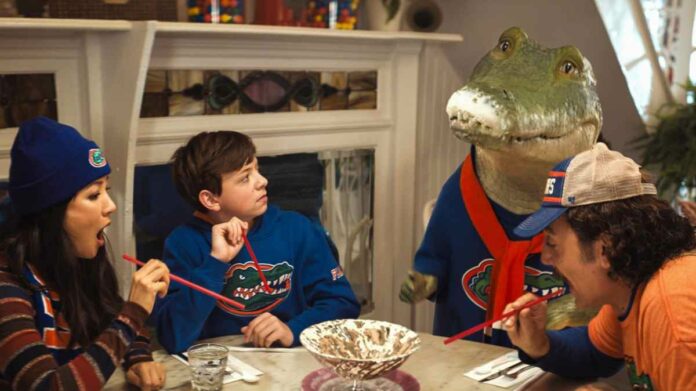 ‘Lyle Lyle Crocodile’ Ending, Explained: What Happens To Lyle And The Primm Family At The End Of The Film?

It is said that movies imitate life. But oftentimes, these movies present a fantastical picture that makes the experience further enriching. One can find one’s reality a lackadaisical passing, and the world of fiction gives just the needed variety and spice. Movies have the power to turn imagination into a visual reality. Be it a human turned into a robot, a bunch of natives on a different planet, crime-solving animals, or even superheroes – movies have it all! “Lyle Lyle Crocodile” is one such movie that plucks the pages of imagination and turns it into a fun musical, visual pastime. Starring Contance Wu and Shawn Mendes in prominent roles, “Lyle Lyle Crocodile” tells the story of Lyle, a crocodile who can sing, and his journey with Josh Primm, a young boy who forms a deep bond with the singing crocodile.

‘Lyle, Lyle Crocodile’ Plot Synopsis: What Happens In The Film?

The film revolves around a crocodile who can sing. Hector P. Valenti is a showman in New York City. He is a failed artist and is desperate for success. He comes across a small singing crocodile and adopts him. The crocodile is named Lyle, and he is perfectly harmless to humans, contrary to the general idea of crocodiles. Lyle cannot speak, but he can sing. He also understands what humans want to convey to him. Hector starts to train Lyle for a spectacular show. On the premiere night, Lyle freezes on stage. The show is canceled within minutes, and Hector is bankrupt. Hector had mortgaged his apartment in exchange for the show, so he lost his home. He abandons Lyle and takes off in search of new success.

Some eighteen months later, the Primm family finally moves into Hector’s apartment. Mr. and Mrs. Primm is excited to move to New York City, but their son Josh is very anxious. He keeps on rattling off numbers and facts about why the move is a bad idea. Mr. Primm is a math teacher at a high school. The Primm family moves to New York because Mr. Primm found a new job there. The school provided the said apartment as accommodation for Mr. Primm and his family. Soon, he finds Lyle in the attic of their house. They were afraid at first, but Lyle and Josh became best friends soon. Mrs. Primm also finds out about Lyle, and although reluctant at first, she befriends him as well. Mr. Primm is the last person to find out about Lyle, and he is cold toward him. Lyle challenges him to a match one day, and he fakes his defeat. This gives Mr. Primm a soft corner for Lyle, and he warms up to him.

Lyle and the Primm family are having a jovial time, much to the annoyance of Mr. Grumps. He is a very nosy neighbor and has complaints about everything. He suspects the Primms of causing a nuisance and installs CCTV cameras all over the neighborhood to keep an eye out on the Primm family mainly. One fine day, Hector returns to the apartment. He thinks that Lyle might have broken out of his fear of stage performances and takes him there again. But Lyle freezes on stage, and Hector is once again left with nothing. Mr. Grump eventually finds out about Lyle and calls for a neighborhood meeting. The installation of CCTVs is brought up in the meeting. As revenge, he offers money to Hector and calls the wildlife department to take Lyle away to the zoo. Hector runs away yet again.

The Primm family makes an attempt to get Lyle out of the zoo but fails. Hector comes back and visits Josh. They decide to break Lyle out of the zoo. They succeed but have a trail of police chasing them. Josh talks to his friend and asks her to get a spot on a reality show. Lyle and Josh go to the stage, and Lyle overcomes his stage fright. His performance is applauded by the audience. One month later, Mr. Grumps is seen in the court fighting the Primms against keeping Lyle at home. When he makes a slightly nasty remark at the judge, the judge clears Lyle to stay at the Primm’s residence. The Primm family is overjoyed, and they leave for a vacation with Lyle. Hector is a little surprised to find this, but his attention is soon brought to a pet rattlesnake who can belt out some dashing music.

‘Lyle Lyle Crocodile’ Ending Explained: What Happens To Lyle And The Primm Family?

The musical comedy is a treat for those who like to watch a little fantasy peppered with a slice-of-life story. Shawn Mendes voices the titular character through songs. In the last 30 minutes of the movie, we find that the Primm family and Lyle have developed a deep bond. Regardless of Lyle being an animal from the wild, he is harmless to humans. In fact, he even comes in to protect the Primm family if the need arises. The viewers don’t really know what happens to Lyle at the end of the movie. Sure, he went on vacation with the Primm family. He has also released a few music tracks online. But how long can he actually stay with them? After all, a wild animal inhabiting the same space as humans is hazardous for both. If one wishes to mull over it yet, then it can be surmised that Lyle would probably pursue singing. He would be a sensation for some time, and his success would be the talk of the town. But other than that, life would go on ordinarily for the Primms and Lyle like it did before Lyle’s success in the media.

What Story Do The Characters Tell Us?

Javier Bardem plays Hector in the film. The character is quite quirky, dusty, and thirsty for success. He only sees Lyle as an opportunity to strike gold and forgets that there could be an emotional connection between them. When things get rocky, he flees the scene, leaving Lyle to deal with things by himself. Hector only comes back when he realizes what a grave mistake he made by leaving Lyle to fend for himself. Reuniting Lyle with the Primms is Hector’s act of redemption for his past wrongs towards the innocent creature. At the end of the movie, we see that as soon as Lyle leaves for a vacation with the Primms, Hector’s attention is caught by a rattlesnake belting out music. This shows that he is back to being the fleeting human he was before—the one who wants success and would do anything for it.

Constance Wu of “Crazy Rich Asians” fame is seen as Mrs. Primm. She is Mr. Primm’s second wife and Josh’s stepmother. Mr. Primm married her after his first wife passed away. Mrs. Primm is quite protective of Josh. Like any mother, she wants the best for her son and would do anything to get it. She is a popular figure in social circles because she has written best-selling cookbooks. In an attempt to create the perfect eating lifestyle, she turns into a very picky person when it comes to food choices. Spending time with Lyle makes her realize the importance of letting things take their course and that sometimes it is good to let things go.

Mr. Primm, on the other hand, is quite anxious about his new job. He is struggling to get his voice across in his class. After that match with Lyle, Mr. Primm is woken with a newfound confidence which he uses to assert his position in his class thereon. Lastly, the character that was most impacted by Lyle’s presence is Josh. Josh is the first to meet Lyle. He befriends Lyle and develops a deep bond with the singing wild creature. He also manages to get over his anxiety about living in Manhattan, New York. He finds a friend in Lyle, and that helps him grow into a confident young boy.

“Lyle Lyle Crocodile” is a movie that you should watch if you want to find slivers of relatable moments matched with fun dance numbers. The musical comedy is a joy ride of an hour and thirty minutes, perfect for watching with your family as well!

“Lyle Lyle Crocodile” is a 2022 animated comedy drama film directed by Will Speck and Josh Gordon. 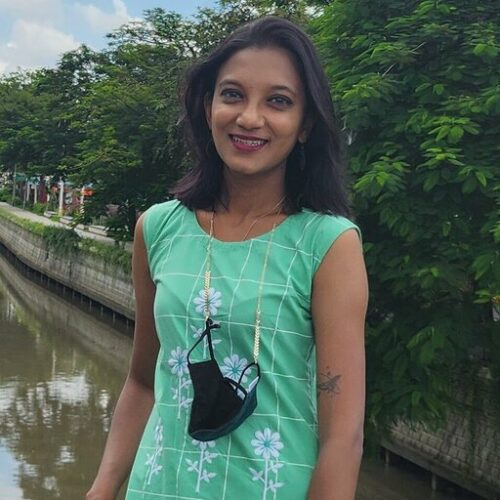 Nandini Iyengar
Nandini has grown up on a healthy diet of books, movies and shows. Hailing from a multicultural background, Nandini has tried indulging in art from different corners of India that came naturally to her. Taking the influence further, she delved into foreign languages and indulged in content from across the globe. When she is not watching anything on her laptop, she can be found daydreaming or picking her pen to write a few words of fiction.
Subscribe
Login
0 Comments
Inline Feedbacks
View all comments