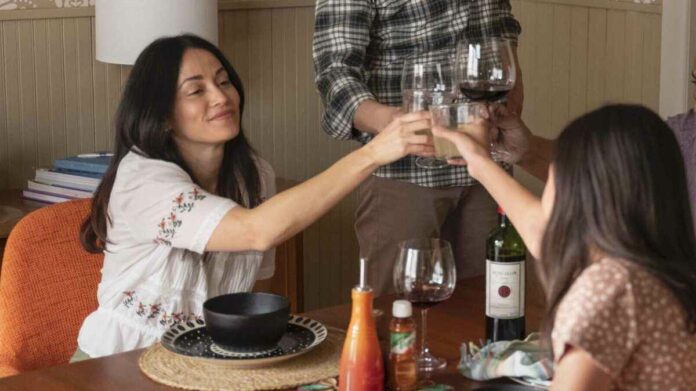 ‘Let The Right One In’ Episode 7: Recap & Ending, Explained: How Did Elizabeth Kane Die?

In the last episode of “Let The Right One In,” we see Claire hitting a breakthrough in her research and asking her brother Peter to provide her with a live specimen as she is done experimenting on rats and chimpanzees. We also saw Mark kissing Naomi, suggesting a blossoming relationship. And now the story continues.

“Let The Right One In” Episode 7 unfolds with a flashback into Mark’s past, where the love of his life, his wife, is alive and well and having fun at a family dinner joined by his best friend, Zeke. Mark appears happy, adores cooking for his family, and wishes for his daughter Eleanor to become a chef rather than an astronaut based on her talent to recite the entire ingredients of any dish she tastes. But now everything has changed. Mark cooks to make ends meet and take care of his daughter, not for the love of it.

Zeke asks Eleanor to join him for a horror movie marathon, but she turns him down, saying Elizabeth is helping her set the telescope before she leaves for work. After setting the telescope, Elizabeth leaves to fetch Mark, and we see a shadowy figure crawling up in the trees. Distracted by the slithering, Eleanor looks up and is attacked by the figure. Meanwhile, Elizabeth interrupts Mark and Zeke’s conversation about cramming too many tables in the dining area and asks him to put Eleanor to bed by 9. However, they’re drawn outside, hearing Eleanor’s screams, and find her drenched in blood and unconscious. Back at the hospital, the surgeon labels her injury as a coyote bite, but we see that Eleanor’s physique is changing, as suggested by her craving for blood and distaste for normal food. Back at the house, Mark is visited by Animal Control and is having trouble finding out what bit Eleanor. Mark and Zeke meet Eleanor, suggesting they transfer her to a different hospital, but Elizabeth denies it on the grounds that moving her in this condition would do her more harm than good. Afterward, everyone gets down and closes their eyes to pray, and Eleanor, starving to death, seizes the opportunity and tries biting her mother but is stopped by Zeke. Zeke immediately realizes what’s happening and asks Elizabeth to grab a vial of blood to feed Eleanor. “Let The Right One In” Episode 7 digs deeper into Mark and Eleanor’s past and maybe answers the lingering question, “What happened to Elizabeth?”

The Aftermath Of The Bite

Mark and Eleanor argue with the doctor to relieve Eleanor into their care, but as soon as she steps inside, her veins burst, and she starts bleeding from everywhere. But Zeke again saves the day and welcomes Eleanor into her home. Zeke knows an awful lot about vampires and knows they can’t enter a house unless they’re invited in, probably because of all the late-night horror movies in the Marathon. Zeke was also the one who suggested Elizabeth draw out Mark’s blood to feed Eleanor. Mark and Zeke enter an abandoned sewer in hopes of finding the person or creature who bit his daughter and are rattled by the swarms of cockroaches. They overhear a loud echoing and decide to follow in that direction but are met with a dead end. The attack on Eleanor wasn’t accidental, as the town has been subjected to 10 such attacks. The thing that bit Eleanor moves underground and only comes up to hunt for food and a new target, and Mark wishes to go down there again and see if he can find any clues that can take him to the host. Mark discusses his plan with his wife, who reveals that there are more important matters at hand. Elizabeth has been keeping track of how much blood Eleanor consumes, and according to her, Eleanor needs around 1 liter every other day to keep her sane and tranquil. Mark suggests feeding Eleanor in rotating shifts, but Elizabeth, being a doctor, informs him that their bodies are unable to replenish fast enough to keep up with the demands, and it won’t be long until they no longer have a drop to feed Eleanor. Eleanor needs blood every other day to avoid starving and could consume only fresh human blood since it takes only an hour after the blood leaves the body before it goes bad. We learn that Mark and Elizabeth aren’t perfect pairs, and the latter always blames Mark and insists that she’s the only one who’s taking care of everything and breaks down in tears. Mark comforts her and promises to chase after every lead and to push the map further out if he hits a dead end, but he’ll do everything in his power to restore his daughter’s life back to normal.

‘Let The Right One In’ Episode 7: Ending Explained – How Did Elizabeth Kane Die?

Mark begins his search and knocks on the door of every one of the victims; he even explores the tunnels and questions the homeless about any sightings of a strange creature or being. Meanwhile, Zeke has moved back to New York and has been running his restaurant while he eagerly waits for his best friend and head chef to join him. Mark even meets Claire, Peter’s sister, and inquires about his brother’s bite, and the latter reveals that he has been bit by a bear on a family hunting trip and closes the door in his face. In reality, Peter already knew Eleanor and had been bitten by the same man who took their addresses while they were out enjoying the stargazing event. Arthur, Peter’s father, is aware of the vampire bite, is treating his son in secrecy, and has been manufacturing an illegal drug to market to fund the research. However, he dies soon afterward, prompting his daughter Claire to take over the helm.

Mark returns home and asks Zeke to sit down, who has come to feed Eleanor his blood too. Mark throws a file on the table containing a list of sex offenders and points to the one living a mile away from their home. Mark suggests kidnapping the offender to feed Eleanor, or else she’ll die before sunrise. Zeke gazes at Mark in surprise and calls Elizabeth, telling her everything and requesting Mark to stop this madness and let go of Eleanor, but he has to leave the house when neither of them agrees. For the sake of his daughter, Elizabeth agrees to help Mark take down the offender. Mark has been following the person for days and has come to realize that he lives alone in a basement. Mark follows the man and hits him from behind, hangs him upside down, and stabs him multiple times to collect his blood. Mark leaves the place in a hurry and mistakenly hits the car in front of him. Cops are called, and the struggle makes Mark lose an entire hour, ruining the blood. Mark reaches home and breaks down in tears. Left with no choice, Elizabeth walks into Eleanor’s room with the intention of feeding herself her own blood, unbeknownst to Mark. She adores the final conversation she has with his daughter before picking up a knife and cutting her wrist to save his daughter’s life, eventually sacrificing herself.

“Let the Right One In” Episode 7 finally answers the most obvious question. Earlier, we believed that Mark had played a role in Elizabeth’s death when we walked into the church for confession. But that’s not true; Elizabeth takes her own life so her daughter can live. The preview of the following episode reveals that Mark promises to stop killing and surrender himself to the authorities once Eleanor is cured. Mark, to this day, blames himself for Elizabeth’s death, discarding the fact that he did everything he could to reach home that day in time.

See more: ‘Let The Right One In’ Episode 6: Recap & Ending, Explained: Was Claire Able To Slow Peter From Ageing?

Rishabh Shandilya
Rishabh considers himself a superhero who is always at work trying to save the world from boredom. In his leisure time, he loves to watch more movies and play video games and tries to write about them to entertain his readers further. Rishabh likes to call himself a dedicated fan of Haruki Murakami, whose books are an escape from his real being.
Subscribe
Login
2 Comments
Oldest
Newest Most Voted
Inline Feedbacks
View all comments