“Holy Spider” is a true crime film directed by the Iranian filmmaker Ali Abbasi that takes us through the killings of prostitutes in the holy city of Mashhad, Iran. The film caters to a feminist gaze and moves with the narrative through Rahimi, a female journalist’s journey in the holy city of Mashhad. The film takes a major toll on the viewer as it portrays the brutal violence of women on screen. It starts with the news of the events of 9/11, immediately transporting the audience to the year 2001. The next scene revolves around an unnamed prostitute who gets killed in the next ten minutes of the narrative. “Holy Spider” is released 20 years after the massacre and takes a feminist path, commenting on the condition of women in Iran, which resembles the situation in contemporary Iran as well.

The film is fictionalized by the true crime of a serial killer named Saeed Hanaei, who was famously called Spider Killer by the Iranian media. The serial killer was a mason by profession who started killing prostitutes in the task of ‘cleansing’ the holy city of Mashhad. The chilling violence against women and ingrained misogyny in Iranian men allow the film to transcend and become more than a general serial killing film, which goes beyond using various tropes of such true crime-based films. In one sequence of the film, we get to see that the journalist woman is denied a room because she is a single woman and is asked to cover her head properly because her hair is showing. This scene resonates with recent events in Iran, which comment on the condition of women in Iran for the past two decades.

The introduction of the character of Rahimi is through the mentioned event; when she produced her journalist identity card, she was reluctantly given a room, which is a raw portrayal of the condition of women in the second largest city of Iran. For international audiences like us, Iranian cinema is referred to the works of Abbas Kiarostami, Samir Makmalbauf, and Asghar Farhadi, to name a few, but Ali Abbasi makes the film much more suitable for western audiences. Our understanding of Iranian cinema includes the long shots, scenic beauty of the cities, and conversation throughout, but Ali Abbasi focuses more on the tropes of western Hollywood films based on serial killings and less on the Iranian essence of filmmaking.

Throughout “Holy Spider,” we see how Saeed kills prostitutes who were situated in the surroundings of a holy shrine and goes on his rampage, thinking it was God’s work. He believed that ‘those’ women were morally corrupt opium addicts who chose the mentioned means of livelihood as opposed to a respectful living; their existence on earth threatened the pilgrimage of the city. The character of Saeed seems to be always angry and nervous; his introduction to the film is him killing a prostitute, and his identity is marked by a red stone ring on his hand.

“Holy Spider” stands apart from general serial killing-based narratives as it comes with a strong ideology and focuses much more on the characters than the general tropes like the legal proceedings, arrests, media coverage, etcetera. It focuses more on the brutal violence, and terror women went through in the year of 2001 and the condition, perception, and existence of Iranian women in their social landscape. The character of Rahimi was that of a journalist who had a respectable profession but was considered insignificant when it came to her thoughts and views. The characters of prostitutes did not have any names, which very neatly situates their meaning in society. The women on screen were all flawed and imperfect, with minimal make-up, cracked lips, and bruised and dehydrated skin, all showing their economic and social condition, yet they had been vilified for their profession. The character of Rahimi, on entering her hotel room, is shown to check the contents of her bags; a pocketknife and sanitary napkins are highlighted, portraying two necessities of a single traveling woman. Ali Abbasi shot the film from a female gaze, focusing on characters, make-up, and facial compositions, which makes the film stand apart from our understanding of Iranian cinema, but more westernized and meant to cater to audiences from all parts of the world.

Among the 16 women, only one was given a name: ‘Somayeh,’ with whom the film starts. She kisses her child before leaving for work; the camera focuses on her smudged, cheap make-up. She changed herself into her working clothes in a public washroom, where she kept her flat shoes in wrinkled plastic, and then she went on about the night. When she was choked, she mentioned the existence of her child, who was to be saved from the killer; later on in the film, only her family is interviewed during the trial of the killer. Somayeh’s father broke down during the interview, whereas the mother was hateful towards the victim because of her profession. During the interview, we see and understand that the family was ready to accept a financial settlement in exchange for the victim’s killing, as she had a daughter to be taken care of.

The Spider Killer had a signature style of killing his victims, killing them with their own headscarves. He thought killing them with their scarves would send a message—his originality and ingenious way of killing women without leaving any clue. Saeed is a family person who struggles to hide his activities from his family. Throughout the narrative, we see that his family is supportive of him; his oldest son supports his killings as God’s cause of cleansing society. This reflects the condition of prostitutes and their position on the social ladder. Saeed’s character was considered just because he killed prostitutes, as God’s holy activity, and when he was executed, the streets of Mashhad were filled with protests, supporters of Saeed, who, to them, was wrongly accused.

Ali Abbasi has portrayed the character of Saeed as a ‘normal’ human being who was a respectful masonry worker. The idea is to humanize Saeed and his activities which does not fall under the trope of regular serial killer narrative-based films. Saeed is a perfect husband to a very beautiful young wife, a good father to a young daughter and his oldest son, and his family has no idea about his holy activities. In one sequence in the film, Saeed’s wife comes home unexpectedly when he has just finished killing; he keeps the body hidden, but he gets sexually aroused seeing the dead body’s feet from a distance. In the course of the trial and interview, he mentioned that he got addicted to killing and couldn’t sleep properly at night without killing. He regretted having “almost” 17 women but did not feel it was wrong as he was cleaning up society. He compared his killings to social activism, and the common people of Iran resonated with his social activism and showed solidarity and support when he was held captive.

In this article, we are analyzing and highlighting the sequences that made “Holy Spider” a social commentary on Iranian women and how their existence seemed irrelevant to men. Rahimi, the journalist, was subjected to sexual harassment while working in Tehran, and calling it out cost her job. While investigating in Mashhad about the killings, the police chief behaved inappropriately and called her a “whore” as she smoked cigarettes, and her hair wasn’t properly covered with her scarf. Throughout the film, Rahimi is subjected to sexism everywhere: in the court of law, from her fellow journalist colleague, and from the killer as well. She dressed up as a prostitute by wearing dark-colored lipstick on her quest to identify the killer, as the police weren’t helping much. All these events indicate the condition of working women of Iran who were subjected to public gaze.

“Holy Spider” ended with video footage of Saeed’s son enacting how his father killed his prey by putting his youngest sister on the carpet. He enacted the whole activity, from strangling to rolling, and calculated the time. He admired and felt inspired by his father. This showed the ingrained sexism and misogyny of the existing Iranian society, and after two decades, a woman is killed in reality for not covering her hair. The film takes us through the narrative of true events and portrays the oppression and brutal violence faced by women. Women in public are always held accountable, and their roles are restricted to the insides of the house. In this article, we have picked a few significant sequences from the film, extensively analyzed and understood the ingrained sexism of the Iranian men, their perception of women, and how in general, women are considered insignificant. The film is an amazing social commentary that comes with a true yet fictionalized narrative and was shot without following the general Iranian filmmaking style. Ali Abbasi amalgamates Iranian aesthetics and sews his story into a western portrayal of events; the film stands out and has become this year’s festival favorite. 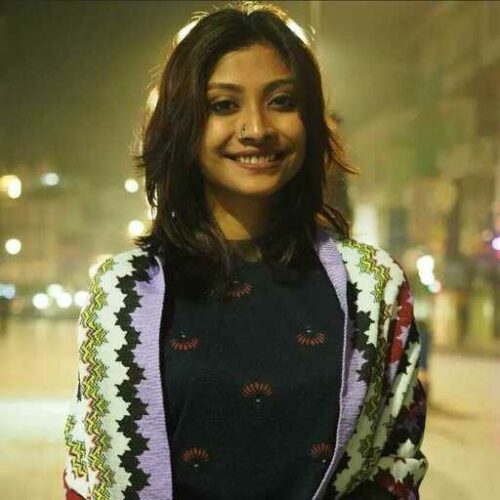 Mouparna Guha
Mouparna is a budding film and gender scholar with a degree in media and film studies.
Subscribe
Login
0 Comments
Inline Feedbacks
View all comments