In words and in art, Aisha Chaudhary found solace as she expressed her deepest thoughts and desires by painting and writing poetry. Her world grew smaller and smaller as her illness and her struggles took up most of the space. In the gut-wrenching documentary “Black Sunshine Baby,” the director Nilesh Maniyar weaves a story full of glorious ups and desolate lows with narration and anecdotes from the people closest to Aisha: her parents, Niren and Aditi, and her elder brother, Ishaan.

“Black Sunshine Baby” features a myriad of Aisha’s best works, from her vivid paintings to her poetry, that demand depth, and a certain sensitivity to fully grasp the essence. While it also gives us a glimpse into Aisha’s lowest moments from archival footage, we simultaneously wonder why the Chaudhary family would record their beloved daughter in misery. The videos show Aisha coughing and lying in bed, covered in tubes and machines. Nonetheless, she endures her pain with a smile on her face. It makes us ponder their decision to keep a record of her despair.

This gets us to another feature film that covers Aisha’s long and arduous experiences: “The Sky is Pink.” Starring Priyanka Chopra and Farhan Akhtar in lead roles, the movie wonderfully charts the journey of the Chaudhary family, from their first daughter Tanya to their lovely daughter Aisha’s demise. While Niren and Aditi’s story forms the pivotal focus in “The Sky is Pink,” we see a shift in the narrative in this documentary. Aisha comes to the center of the stage (both literally and figuratively) to shine as the true protagonist of the documentary. This points to the central video in the documentary that shows Aisha on stage discussing happiness at INK talks.

In every rightful sense, she is the black sunshine baby, as she manages to find or even create a luminous ray of light in the darkest of caves. As Aditi reassures Ishaan that his sky can be any color that he wants in “The Sky is Pink,” the documentary reaffirms the fact that Aisha can shine in any possible situation, no matter how dark the night may get. Furthermore, while the movie shows Aisha in a certain extroverted persona, we are greeted with a very shy and introverted Aisha in the documentary. The underlying reasons, as depicted later, are bullying and unkindness on her peers’ part.

Diving deeper into Aisha’s story, “Black Sunshine Baby” succeeds in charting her life from her early years, when Aditi used to live with her in the UK by herself, away from Niren and Ishaan. The Chaudhary family has been through tumultuous times only to keep their precious baby alive. Due to severe combined immunodeficiency (SCID), Aisha never had a normal childhood. She had to be shielded from diseases as her body could not battle alien viruses and bacteria. The documentary intersperses Aisha and Tanya’s stories, the latter being the first daughter of Niren and Aditi. Both parents have a recessive gene, due to which their daughters have SCID. While Tanya succumbed to the disease early on in life, Aisha continued to fight for her life to live another day.

A huge credit for saving Aisha’s life goes to the generous people of the UK who donated however much they could. Niren and Aditi mention the same in the documentary and will forever be grateful for their contribution. The doctors and the people at the Great Ormond Street Hospital worked tirelessly to find a cure for baby Aisha. They performed a STEM cell transplant with chemotherapy, which was conducted for the very first time in Europe. The operation turned out to be a revolutionary step in the field of medicine and in Aisha’s life as well. Just the sight of a tiny baby all tangled in tubes makes your heart weep. However, the story doesn’t end here. In fact, this is only the beginning of the strenuous experiences in her life.

Aisha’s whole life, let alone her childhood, was far from normal. Not just her illness and condition but her extraordinary zest for life and passion for art make her stand out. “Black Sunshine Baby” showcases her artwork with pride, with every piece of footage and anecdote accompanied by a piece of art that bridges the gap between her life and the narration. Thus, it feels as though the story is being shared by Aisha herself. When she ran out of canvases to paint and colors to fill, she turned to the beauty of words and poetry to get her emotions out. These turn out to be the perfect outlets for her anguish and anger toward the world.

Moreover, Niren and Aditi tried their level best to give Aisha everything she could possibly wish for. They squeezed in every possible experience for their daughter in the limited time that she had. From lively festivals and weddings in India to parties and home dancing sessions to enliven their boring days, the Chaudhary family spared no expense to make Aisha’s time wonderful in every facet. The documentary gives the viewers an apt image of the extent parents will go to so that their children can be happy. But just when things were going well for Aisha and her family, another bout of woe hit them like hail on glass.

When Aisha collapsed on the stairs in school, she was taken to the hospital immediately, and the diagnosis threatened their almost perfect life. Aisha was diagnosed with Pulmonary Fibrosis as her lung capacity was only at forty percent. Doctors tried reassuring them that it was not life-threatening and that Aisha could live a normal life with a few precautions. Eventually, Aisha realized that God had more terrible things in store for her. She started feeling suffocated and had a tightened chest every time she tried to breathe. Furthermore, she had to fit a mic-key tube in her stomach because she couldn’t eat properly and get enough calories.

As the documentary progresses, it gets tougher and tougher to watch it without letting our hearts tremble with pain and sympathy. We believe Aisha’s dogs felt the same. Considering she couldn’t make friends very easily, Aisha and Ishaan adopted two dogs, Kobe and Rolo, to keep them company. Aisha couldn’t move around much or even go to school regularly, so along with her art, Kobe and Rolo also kept her company. She loved them both as a mother loves their children. In one instance, Aisha screamed and yelled to call her dad, as Kobe couldn’t get up or move about. After Niren checked up on him, he found that Kobe, being a loyal and loving dog, was trying to take over Aisha’s pain so that she could be happier. Such a moving display of love from an animal is hard to ignore.

Aisha’s relationship with her dogs also resonates in her art, words, and dreams. In one of her works, she recalls a dream where Rolo was dressed in a tuxedo to take her to prom. When we dissect her thoughts and expressions further, we find how intricately Aisha’s fears and desires manifested in her passionate paintings and poetries. Since she could not make friends or have normal teenage relationships, she wished her precious dogs to be humans instead so that she never needed anyone else. She hoped to forget the world around her and get lost in a fantasy land surrounded by her paintbrushes, canvases, and her beloved dogs. It reflects the excruciating reality of people living with the condition that torments them every waking second. On top of that, people’s pity or fake concern did not make it any better for Aisha.

Akin to any teenage girl, Aisha also experienced her first love and, consequently, her first heartbreak. She smiled and remained joyous all day long as she talked to a boy and found delight in her feelings. Things progressed gradually, and Aisha fell deeper and deeper in love. After she finally confessed her love, she was met with a terrible blow as the boy did not reciprocate her feelings. You would think that a girl as strong as Aisha, who has been through far more sorrows in life, would get over a broken heart. But, at that stage, the ending of the world feels near, and nothing seems as bright anymore. Aisha went through a similar phase. On the other hand, Niren and Aditi were happy to at least see their daughter have this experience and live life to the fullest.

Ultimately, “Black Sunshine Baby” offers a comprehensive overview of Aisha’s life through the paintings and epiphanies she left behind. Aisha’s first and only book, “My Little Epiphanies,” was published by Bloomsbury just before she passed away. Her family revels in Aisha’s remnants as they keep her in their hearts and prayers every single day. Though nothing in life can fill the Aisha-shaped hole in the Chaudhary family, we believe they can move on knowing that the world understands and praises Aisha for her strength, determination, and unwavering conviction to live a little longer. 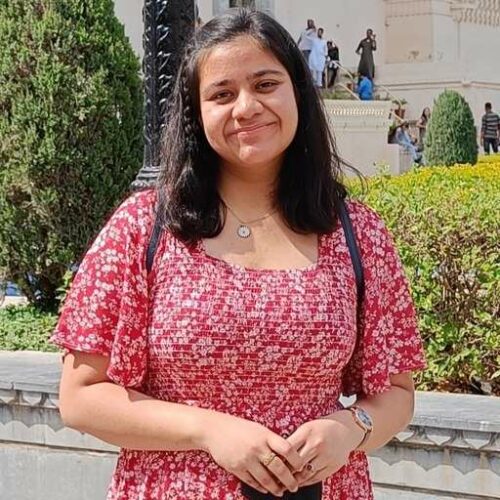 Vidhi Narula
Bio: With a degree in Journalism and Mass Communication, Vidhi puts her skills to use for dissecting and analyzing the essence of entertainment features. She loves writing about movies and shows that fascinate her. Her love for the numerous fictional worlds grows with every piece of content she consumes. All she hopes to do is deepen her knowledge of the world on screen and widen her horizons by watching movies from across the world.
Subscribe
Login
0 Comments
Inline Feedbacks
View all comments