If you approach “A Short Story,” now streaming on Mubi, expecting a conventional drama filled with some characters and a revolving plot, chances are high that you will be disappointed. In this 15-minute short directed by Bi Gan, we are introduced to a world seen through the point of view of a black cat. It’s a surreal, fantastical vision prompted by chance encounters, fantastical observations, and questions on communal harmony. In just 15 minutes of screen time, the elliptically titled short aims to offer a peek into its worldview. What does the cat see that transforms him into a worldly-wise creature of its own? Where does he go? Where does the journey end? These were some of the questions that went through my head when I first saw the film. “A Short Story” is inventive and deliberately open-ended, and perhaps that is its biggest draw. If you’ve experienced the short, there’s no way you would say no to a second watch—such is its mysterious power. This article will try to assimilate some of the core ideas in the short film that reveal themselves through visual metaphors. If you haven’t seen the film, the cue is to see it first and then come back to unlock all the visual wizardry surrounding it.

“A Short Story” begins with the shot of the black cat’s pupil as the voiceover guides us through the next shot of a deserted, foggy field. Bi is inviting us to see the world through the eyes of the black cat, who remains unnamed and homeless. The black cat meets the scarecrow on the field and asks, “what is the most precious thing in the world?” The question itself is so unusual and striking for its context—it is as if the cat is desperate to seek the most precious aspect of life worth living for. The single question is a cue for the film to take on more interesting parallels between existential dread, survival, and destiny. The scarecrow says that it doesn’t have the answer to the question, but there are three weirdos who might. The scarecrow then tells the cat to set it on fire. It is this expedition of the cat- to find the answer from these three weirdos that forms the core of “A Short Story.”

The first address is that of an orphanage where every child receives a dark sweet. The cat, now dressed from head to toe in the scarecrow’s black attire, finds the place and enters the room. Bi sets the scene in a dimly lit room filled with a huge plastic-like sheet that makes it look abandoned and lonely. Inside the room, the cat sees its own reflection on a broken glass, which could mean that the cat had also felt the same desolation and incomprehensibility during his younger days. The orphanage itself is a symbol for the first phase of life, where a person learns to speak and learns a language bit by bit. It is a time when no one really registers what you say or do in a serious way. There is a sense of collective imagination that defines childhood. The cat cannot help but notice the person talking in an automated language—could it be a robotic inimitability of signs and symbols that is taught there at the orphanage? Does that signify that the children who once lived there are inherently in search of a greater meaning to their identity, growth, and a sense of purpose in life? The cat takes the dark chocolate, but the voiceover reminds her that cats are averse to anything sweet, so she doesn’t want to taste it anyway. The dark sugar is symbolic of the bittersweet reminder that perhaps childhood is not going to last forever. One will have to grow up to face the realities of living one’s life against all odds. One has to persevere and fulfill one’s dreams. No matter how untainted and magical it may seem, childhood ends with a bitter taste of reality.

The cat then goes on to search for the second weirdo and finds that it is “a woman with a short memory,” who has a bowl of “losing memory noodles” every day to mourn the tragedy of losing a lover. The woman is unnamed and stays alone in a dimly lit room, which then reveals itself to be the compartment of a train. She stands by the door and sees the train pass through the tracks until it stops at a red signal. The woman is a young adult who is coming to terms with a turbulent relationship. She signifies the period of adulthood when one is in pursuit of some sort of stability in every aspect of our existence, be it relationships, economic security, or professional career. The woman here imagines herself that she is in charge of her own present, prioritizing her need to mourn the loss of a loved one- yet she’s in motion, her life drifting away from one day to another, all in the resistance to move forward from one heartbreak. This suggests that with years of experience, one understands that times doesn’t wait for anyone. It moves at its own speed, and if one allows no space for growth and acceptance of past mistakes, how can there be room for improvement? The cat doesn’t say anything more to the woman but steadily realizes that she won’t be able to give the answer to his question either. She is in search of the answer herself, preoccupied and restless in her own state of affairs. The halt at the red signal signifies the end of that cycle, where one’s existence comes to a standstill. Just like the woman who cannot remember much of what occurred in her life, a person also loses the meaning of self after several instances interspersed in a life spent living, loving, and mourning.

The cat then meets the last weirdo who is addressed as some kind of a demon. Before that, a letter is read out by the voiceover that says, despite the increasing pollution and climate change, dreams never stop. Human beings continue to dream as one flower adds to another. The love of mankind is at the core of the sun; it is what makes a life worth living. It is certainly the main idea that “A Short Story” drives home. Even after so many challenges and crises, it is the abiding sense of love and the need for companionship that bind one person to another. It is the only feeling worth loving. The cat is still not able to understand the coded letter and thinks of it as a play on words- reflecting (certainly) the perception of the audience towards this film, which is loaded with visual metaphors and coded dialogues. The demon performs a magic trick- it’s nothing but the action set backward, rewinded for a moment of fancy. It is a magic trick if one chooses to look at it that way; otherwise, it makes its visual trickery quite apparent. Life never leads backward, and only cinema, or any kind of art, has the power to offer a glimpse and reflection of the past. It is a template that reminds one to always be careful with words, gestures, and people.

In the end, this helps the cat reflect on the girl whom he knew before. While the cat receives a huge mold of clay from the demon, initially, he doesn’t know what to do with it. Next, as we imagine, he uses it to grow a small flower as a present for the girl when he meets her in the next scene. Perhaps that is the most precious moment that he was chasing after- the act of spreading joy, kindness, and hope. The cat walks away, and we see him fully for the first time. As the hat flies in the same distant field where the opening short introduced us to the cat meets the scarecrow, the journey seems to have come full circle. 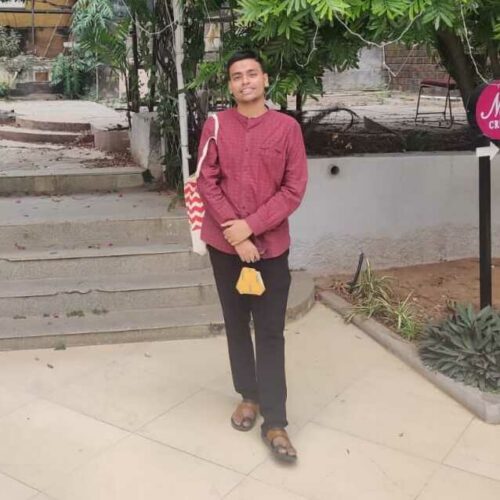